It’s funny. Sometimes when you put your ideas, hopes and dreams into the universe, they come back to you.

I first learned that a few years ago. Just for fun, I wrote a list of all the places I wanted to travel, starting with the ones I’d always thought about, and adding as I saw, read or heard about new destinations. One entry on the list was “Germany and Bavaria.” No sooner had I written it down than my dad called. My stepmother and her business partners were going to a trade show in Frankfurt. Wouldn’t it be fun to meet in Munich, drive down to Salzburg and take the scenic Alpenstrasse back through Bavaria? So we did.

In July, I started officially compiling, and publishing here, my Adventures list. It’s what many people might consider a bucket list of things I’d like to accomplish before I kick it. Mine is so lengthy that I had to divide it into a general adventures list of things to do and see (incorporating my trusty old travels list), a local list of places I want to visit right in my own backyard and my culinary bucket list of foods I can’t wait to eat.

I’m proud to report that in the few short months since publicly declaring these items, I’ve completed several already. Some were intentionally undertaken. Others completely fell in my lap. But that’s the way it happens.

There are few things more satisfying to me than crossing something off a list. So imagine my glee at accomplishing three items at once. In October, I took Dad on a long-promised trip to the NASCAR Hall of Fame, with a stop-off at the highly recommended Elizabeth Creamery, and we closed out the day at the Olde Mecklenburg Brewery. You can read all about it here. 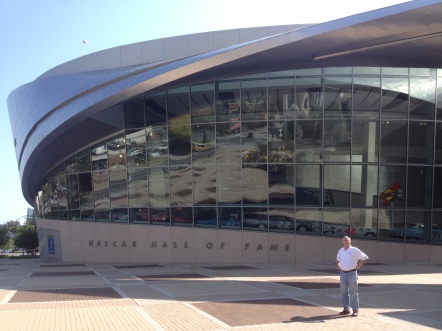 2: “Zipline through a rain forest – well, heck, anywhere.” (from The Big List)

I don’t tend to be a very “adventurous” person. At least not in the extreme sports, hurl-yourself-down-a-mountain-on-slick-planks-of-plastic way. For one, I don’t like my feet to feel unstable. And I’m terrified of heights. Think gone sweaty, weak in the knees and vertigo-stricken. But for some reason I always thought zip lining sounded fun. As soon as I realized that and typed those words on my adventures page, a Groupon fell into my email inbox.

Eleanor Roosevelt says you should “do one thing that scares you every day.” I don’t think my central nervous system could handle something every day, but every couple of months or so helps remind me that I’m alive. I purchased the Groupon and invited some gung-ho friends. Peer pressure, a monetary commitment and a scheduled RSVP was just the accountability I needed to go through with it. After a false start due to weather, we set out on the most beautiful, clear, crisp October day.

Whoever built this zip line is a genius, because it’s in walking distance to a winery. Once we greased the wheels with a couple of glasses of Chardonnay and a Xanax, I was game for just about anything. Thank you, liquid courage.

We suited up in gear, climbed only a few wooden steps and were off.

Dressed up and ready to go. 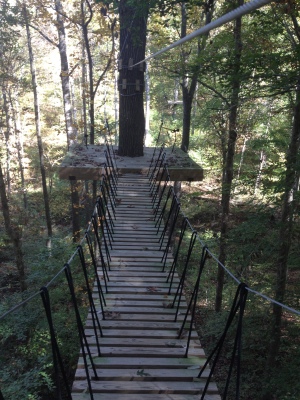 The truth is, there was nothing to be scared of. The equipment is secure, and it’s not particularly strenuous. Our course was spread over small foothills, so we did pass over valleys at heights of maybe 100 feet. As long as you don’t have panic attacks at 10 feet off the ground, I think anyone could do it. If we were on higher ground and hadn’t been so enveloped in the woods, I might have had more of a problem. 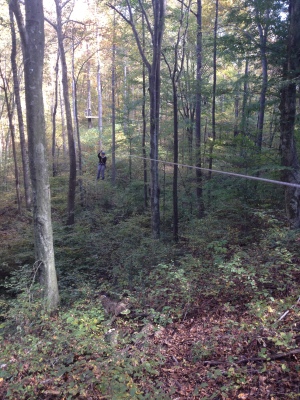 With the wind in our hair.

Coming in for a landing.

Truthfully, it was fun. We zipped through the trees for a couple of hours, and at lengths enough to be able to enjoy it before landing at the next platform.

I mean, I just might do it again sometime.

Our guides were very responsible (and hunky).

3: “Go to a Charlotte Panthers game.”  (from the Playing Tourist list)

My mother is a sports nut. Sorry, an “enthusiast.” She likes watching all popular sports — football, basketball, baseball — and that’s how you’ll find her on almost any weekend of the year. It’s not a quality I inherited, but I believe I’ve absorbed knowledge of most sports games simply through the osmosis of being raised in her house. I do like the social side of sporting events, of course — the camaraderie, the food, the tail-gating. So I still wanted to go to a local Carolina Panthers game someday.

I’d been to the stadium for a college football game years ago, but I’d never attended any NFL game. So I jumped when friends with season tickets offered up any weekend this fall. In December, despite my ailing health, mom and I went to the Panthers-Falcons game.

It was not the prettiest day, but was unseasonably warm. We hopped the light rail to uptown alongside throngs of fans clothed in their Panthers best. Then we marched with the crowds to the stadium, found our seats and settled in for kick-off.

It was exciting. The air was electric with hope. The stadium was decently full, despite the hometown team’s less than stellar record. And the crowd was peppered with a good showing of Falcons fans — not surprising, since Atlanta’s only four hours away. We partook of all the experience had to offer — we chanted, we ate a little Bojangle’s and we cheered the home team to victory. Of all the games we could have chosen, we picked one of the few that the Panthers actually won this season. Go us. 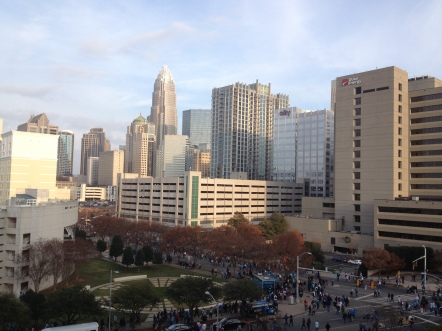 Even though I’ve lived nearly all of my life in or near North Carolina, spent summers at camp in the mountains, have visited the Biltmore estate and camped on the Blue Ridge Parkway, I’d never actually been to downtown Asheville. That all changed in December, when my cousin Maggie, who recently moved there from D.C., invited me for the weekend. We ate breakfast at Tupelo Honey Cafe and Early Girl Eatery and perused local artistry at Woolworth Walk. I’m glad to finally be able to say I’ve visited Asheville properly. Stay tuned for more on that visit soon.

Toss things into the universe. You never know what adventures await.