I’m sorry. How is it only January 21? With as much as I’ve had going on at work since January 2, it feels like it could be May already. Sheesh.

Luckily, I’ve still had a few moments of fun in those harried three weeks. In fact, the weekend after New Year’s my family, and friends who are family, reconvened for a celebration: my uncle Jim’s 70th birthday. The weather gods were with us, because it was a clear — if crisp — evening for a party.

In the fall and winter, during months with an R in them, it is tradition in the Lowcountry — the area of South Carolina stretching from Charleston through Beaufort and Hilton Head Island to Savannah — to have an oyster roast. It’s a backyard, wear your jeans and relaxed clothes kind of occasion. We always do a mini oyster roast on Christmas Eve, but oyster roasts in general are the soirees of choice for almost any fall and holiday get-together in that area.

The oysters are usually harvested locally, sometimes even directly from the river 10 feet away. They aren’t to be washed, since the briny marsh mud “seasons” them as they cook. (Let’s just not think about that part.) I’ve never done the roasting myself, but I understand that the oysters are shoveled onto and layered between water-soaked burlap sacks and left to steam over an open fire until they open. That’s one way to do it, at least. At our gathering, I think a proper steamer was involved.

You may be thinking at this point that oysters are disgusting. Slimy, salty, mucousy, revolting. I don’t disagree with you. Oysters are not my go-to seafood or shellfish of choice, but somehow I can handle them at an oyster roast. For one, they’re cooked, which greatly improves the texture. And the bit of work you have to do to break into one means the reward is that much sweeter. 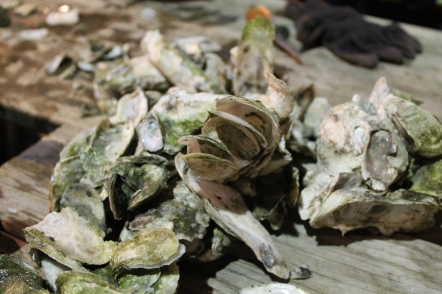 Once the oysters come off the fire, everyone gathers around large wooden tables. My uncle, of course, has his own oyster pit in the backyard. The tables are outfitted with the necessary tools and accompaniments: gloves for handling the sharp shells, oyster knives for prying them open, cocktail sauce and/or butter for dipping. The oyster master comes by and dumps a load of oysters on the table. Then it’s a free for all. We gather and commune at the tables, grabbing shells, twisting them open, cutting out the sweet oyster, dipping and eating. It’s absolutely primal, but also decadent. 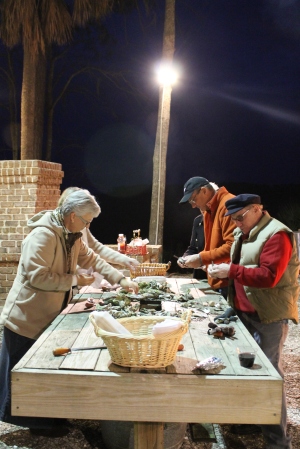 My uncle Jim enjoys oysters, which is most interesting because it’s one of about five foods he eats. Case in point, many of his birthday gifts contained the triumvirate way to his heart: red wine, peanut butter and Diet Coke. So when we find something he enjoys, we have to take special note. I stumbled on such a selection last Christmas, when he complimented me on my stuffed dates. He actually said, “I could sit in the corner and just eat those all night.” Score. I served them again at Christmas this year, but then made another batch in his honor for the party.

I stuffed my dates with gorgonzola and pecans then wrapped them in prosciutto, baked them until crispy and served them with a balsamic vinegar reduction. That sounds fancy, doesn’t it? Well, the process is a bit time consuming, but they are so easy. And they’re sure to impress. Trust me, they go quickly.

One thought on “A roast and a toast.”