I feel like those kids on “How I Met Your Mother”: Dad, it’s taken you a year to tell this story.

View from the top of the Westcliff.

After breakfast — not as good as Mount Nelson, but still five-star — and the requisite hoarding of chocolate pastries, we boarded the bus for a ride to the Apartheid Museum. The building is visually striking, not because of the squat brick museum itself, but because of the statuesque pillars that read: Freedom. Respect. Responsibility. Diversity. Equality. Reconciliation. Democracy. That pretty much says it all right there.

As we entered the museum, we were separated into three lines — white, colored and black. Inside we learned how apartheid had roots in the second Boer War, which generated Afrikaans nationalism and anti-British sentiment. It was formalized in a 1913 Native Land Act that began to limit the rights of black people to buy land. Apartheid became official policy in 1948, after the election of Prime Minister Daniel François Malan, and it persisted with decades of violence and uprising until 1994. The African National Congress (ANC)  was formed in response to the resistance movement, and Nelson Mandela was a founder and leader of its armed wing, “Umkhonto we Sizwe,” or “Spear of the Nation.” I didn’t realize that apartheid really broke down in 1990, but it took four years of negotiations between President de Klerk and the ANC under Nelson Mandela — and continued violence — before the elections in 1994 instituted a true transfer of power.

The ANC remains the party in power of South Africa today. We heard that it still has a reputation for being anti-white and rife with corruption. The other dominant party, the Democratic Alliance (DA), is deemed more multi-racial with middle-of-the road policies. DA wants to move the country beyond its racial history but the ANC continues to push for a regress of the past. We visited South Africa three days after its municipal elections, so we saw plenty of election signage for both parties.

After the museum, we drove to Soweto, which stands for the South Western Townships. It’s 70 square miles, housing 4 million people who are mostly black. We passed the iconic water towers, which I must remember from news events.

After a quick lunch stop at Maponya Mall, where we made a mad dash through a grocery store looking for apple kisses (fail!) and enjoyed (?) a South African version of McDonald’s quarter pounder with cheese, we stopped on Vilakazi Street. Soweto is considered a center of the apartheid struggle and both Nelson Mandela and Archbishop Desmond Tutu grew up there. Willie told us Vilakazi is the only street in the world that’s home to two Nobel Peace Prize winners. 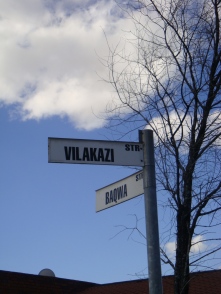 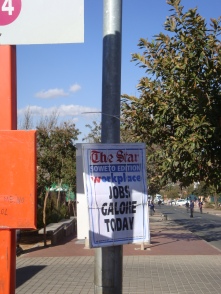 Monument to the anti-apartheid movement, Soweto.

I was actually really surprised by Soweto — it was huge, with township homes stretching as far as you could see. But it was actually very developed and modern too. The mall was just like anything you’d see in suburban America and most of the streets we passed were clean and paved. Maybe we only saw the presentable side of Soweto; I’m sure there are dark and dangerous spots rife with poverty, drugs and violence, like any community. 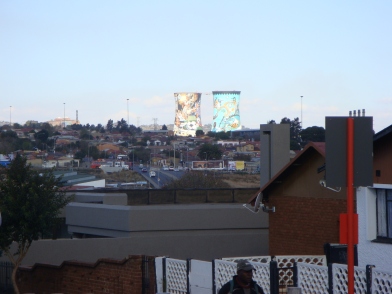 The Soweto towers on the horizon.

As we drove out of Soweto, we passed the donut-like “Soccer City” stadium that was used for the 2010 World Cup games. It was upgraded and partially rebuilt for that event so the design now resembles and African “calabash” pot. 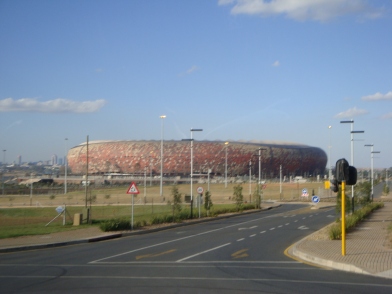 To close the day, we visited the business school at University of the Witswaterand (“Wits”) in Johannesburg, where we heard a presentation from one of the professors on the reputation comparison between South Africa and other countries in the world. The research was based on some program called CountryRep, and it was long, dry, of questionable scientific method and not very interesting. So I won’t even bother.

Those who hadn’t napped during the Wits presentation did so on the ride back to the hotel. A few of us gathered in one of the meeting rooms to start to reflect on everything that we had seen and heard during our trip. We needed to process the enormity and importance of what we’d experienced and to try and understand the lessons that we needed to take home. That conversation touched on the country’s sense of community vs. individualism, education, AIDS, opportunity and possibility, disenfranchised youth, the language challenges and barriers and parallels to our own history of Civil Rights, the women’s movement and disenfranchised generations.

For dinner we met again at the Polo Lounge atop the Westcliff to further commune and reflect another interesting and powerful day in South Africa.

Leave a Reply to "Our traveling without moving!..." Cancel reply