I feel like those kids on “How I Met Your Mother”: Dad, it’s taken you a year to tell this story. 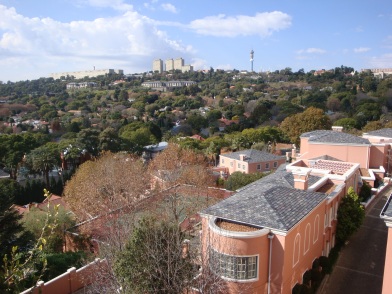 View from the top of the Westcliff.

END_OF_DOCUMENT_TOKEN_TO_BE_REPLACED

Day 4 in South Africa brought our first true disappointment. The weather was still rainy and overcast, but had deteriorated enough that the ferries to Robben Island were canceled for the day. Robben Island is the prison where Nelson Mandela was held for 18 years, and I was really looking forward to seeing what it was like. Bummer.

Instead, we drove around the city and saw more of Cape Town’s residential architecture and government buildings before driving out towards the wine country. On the highway we passed so many townships that we lost count — it’s just acres and acres of dilapidated housing, some decent enough but some nothing more than stacks of corrugated iron paneling. At a break in the drizzling rain we even saw a rainbow … which provided an interesting juxtaposition above the township slum. 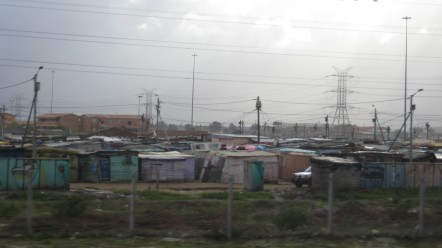 Townships along the highway.

END_OF_DOCUMENT_TOKEN_TO_BE_REPLACED

It’s T-minus 10 days until I depart for the continent of Africa … eek!

In the last few weeks, my travel group has been meeting for several pre-trip sessions to educate ourselves on South Africa’s history, culture and current events. At a recent session we watched “Long Night’s Journey into Day,” a documentary about the work of the Truth and Reconciliation Commission that began in the late 1990s. The TRC was formed by President Nelson Mandela in an attempt to heal the nation after the era of apartheid, and the commission invited all South Africans, whether jailed for their crimes or not, to come forward and publicly confess to any politically-motivated atrocities they committed during apartheid. They could also apply for amnesty from criminal and civil prosecution. The TRC seems to have a strong faith component as well; it was chaired by Archbishop Desmond Tutu, who called the TRC a “national program of reconciliation.” To read more about the TRC, click here.

The documentary featured the stories of four groups appearing before the commission. Many Americans may recall the 1993 murder of student Amy Biehl — one of her murderers, Mongezi Manqina, is featured as he applied for (and was granted) amnesty. Others, such as Eric Taylor, a white security police officer who killed four black anti-apartheid activists known as the Cradock Four, were not. END_OF_DOCUMENT_TOKEN_TO_BE_REPLACED