I’ve had a few weeks off of work and I’ve been trying to whittle through my adventures list. As I realized earlier this summer, I almost never take the time to play tourist in my own hometown. So I seized this opportunity to make good on a daughterly birthday or Father’s Day IOU: taking my dad to see the NASCAR Hall of Fame.

Dad is an avid NASCAR fan. Sure, he grew up and has lived near at least three of the major raceways. But he also understands and is thrilled by all the physics of racing. Where I see a bunch of adrenaline-fueled, cocky young bucks driving cars around in a circle, Dad sees stuff like “drafting” and driving skills and properly maintained car parts.

I started to understand the NASCAR fascination a bit more when I went to my first race at the Lowe’s Motor Speedway a couple of years ago. Sure, there were the requisite shirtless, beer-swilling, mullet-sporting fans who’d camped there for three days. But sitting in the stands, only feet from the track — where several cars wrecked right in front of us — I could feel the energy and the danger. It’s so loud you hear nothing but the roar of engines and the zing! of cars speeding by. You smell burning rubber and feel the reverberations of the cars on the track. It’s sort of thrilling, even when we had no idea who was who or what was going on. Dad was watching on TV at home so he narrated the race for us by text message.

The raceway at Lowe’s Motor Speedway. 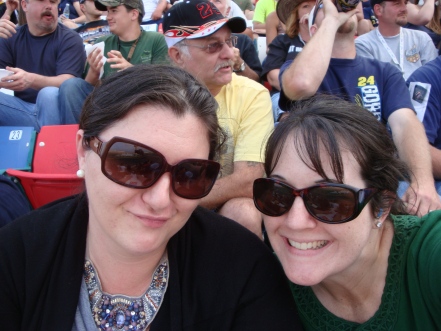 The NASCAR Hall of Fame and museum opened a couple of years ago in uptown Charlotte, and it’s housed in a sleek, architecturally interesting building that I used to drive by every day. There’s been plenty of news and controversy about it, and many friends have already been, so my interest was piqued. On a sunny day in early September, we set off.

We made a full day of it. We ate lunch at Lupie’s, an old watering hole my dad used to visit back in the day. Let’s just say I never have to do that again. Next to Elizabeth Creamery for homemade ice cream that one of my professors declared was the best he’d eaten from anywhere in the world. Well, okay, it was pretty spectacular.

We got to the NASCAR museum in the early afternoon on a Wednesday, so we were two of about seven other people in the whole place. That’s just the way I like it.

The tour starts with a short video about NASCAR past and present. Then we moved through a gallery housing NASCAR cars past and present. The sample track there also demonstrates the grade at different raceways. I think the highest grade was about 30° — I’ll never understand how anyone walks on that.

We continued through the actual Hall of Fame room honoring the drivers who have been inducted so far. Turns out my dad’s neighbor used to know Richie Evans, who died during a practice in 1985.

On the top level, there are demonstration areas to show you the inside of a car, tools used in the pit to change tires and maintain cars during a race, historic racing memorabilia like racing suits, photos, mementos and trophies. There’s even a recording booth to capture visitors’ memories of NASCAR races and interactions.

As he’d been threatening all day, Dad challenged me to race in the simulator. We did a practice run, during which I crashed three times in one minute, so I knew the real thing wouldn’t go well. I played the good sport anyway, simmering with bravado and competition. We entered the simulator area with two other young guys, just the four of us racing. I picked the girliest purple car. The simulator runs for about 5 minutes, and at the end we were to see our rank and number of laps completed. During that “race,” I crashed about three more times, but returned to the pit and kept inching my way around the track. As we stepped out of the car, it was the moment I dreaded most — there was Dad’s name in the top spot of the leaderboard. And there was mine at the bottom. He’ll never let me live it down.

Dad loves him some Tony Stewart.

I covet this car. Ain’t it a beaut?

All in all, I was pretty impressed with the museum. It’s definitely geared toward fans and those with more than a passing interest in the sport — I didn’t really understand as much as I wanted to about how NASCAR is organized with all of its different series and points and levels of races. Or maybe I just missed that explanation. But racing is an integral part of life in the South, and I’ve absorbed more of it than I realized just in atmospheric osmosis. Names and numbers of drivers, even back to the 1980s, rang bells somewhere in my memory. Plus, many of those retired drivers reinvented themselves as team owners or business owners. Their names still endow plenty of car dealerships, wineries, hospitals and cultural institutions around Charlotte. The museum is certainly thorough, laying out the key players and capturing the adventure and danger, the bluster of its drivers and the many years of development from some guys on a dirt track with old cars to a preeminent American sport. Well done.

From the museum, we moved on to the Olde Mecklenburg Brewery. I was already familiar with OMB beer, which is served in many restaurants and bars around town, but I’d always wanted to visit the brewery and its German-style beer garden. A few weeks before I’d also lucked into a Groupon for beer tastings and a sausage dinner — perfect timing for Dad and me to relive some of our beer garden antics from our trip to Germany in 2006. 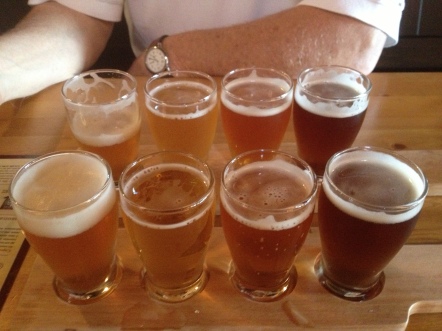 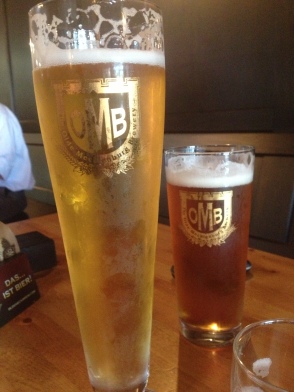 It was the perfect ending to a great day, spent doing fun things with my Dad and crossing a whole bunch of items off my list of adventures. Now on to the next ones!

One thought on “Start your engines.”