On Wednesday morning, I got up early (again) and tubed over to Paddington Station. Remember my earlier London Walks tour of Notting Hill? Well, the company also does day trips to nearby cities and sites by train. The one that fell on Wednesday during my trip was to Oxford and the Cotswolds, which was perfect, since I’d never seen the Cotswolds and haven’t been to Oxford since I was nine. Plus I love all the “Inspector Lewis” mysteries that are set in the town of Oxford.

At the station, I spotted our guide, Richard, in his telltale red cap, paid for my ticket and waited for them to call our platform. I started chatting with Debby, another American visitor who joined the tour that morning. She was also in town for the Jubilee and told me a great story — she’d actually been watching all the preparations on CNN at home in Buffalo that Saturday, decided she couldn’t miss such a royal occasion and got on a plane within two hours. A woman after my own heart! We boarded the train for about an hour’s ride to Oxford. There I also met Trish, an Australian who was passing through London from a wedding in Paris on her way to visit family in Sweden. Even though a citizen of “the commonwealth,” she could not have been less concerned about the Jubilee.

Once in Oxford, we boarded our coach at the station and rode through the town on our way out to the Cotswolds. It’s a quaint, lush area of England that’s been designated an “Area of Outstanding Beauty.” Eric told me that you can rent one of the thatched cottages for vacation, and indeed Richard told us that lots of Londoners buy weekend cottages there. We have a neighborhood in Charlotte called “Cotswold,” so it was only appropriate that I went to check out what I assume is its namesake.

We rode through beautiful landscapes, with patchwork green, rolling hills. After a treacherously narrow bridge crossing, we stopped in the town of Minster Lovell for the first part of our “walk.” We meandered up a lane lined with charming, ivy-strewn, thatched- and slate-roof cottages — one of which recently sold for $700,000! The cottages have to patch their thatched roofs every eight years, during which the yellow straw weathers to gray. Interesting home upkeep. All of the cottages are also named instead of numbered, so your address would be “Rose Hill Cottage” in Minster Lovell. How Austenian! 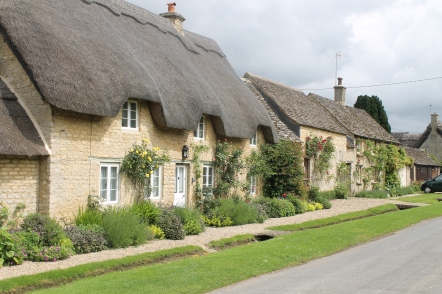 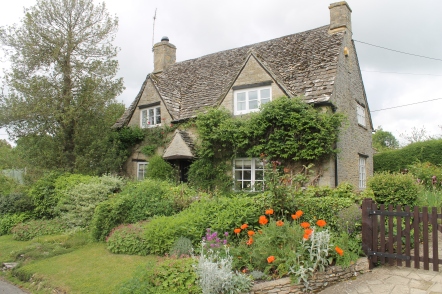 At the end of the lane we found a church. The “minster” in Minster Lovell means church, while “Lovell” refers to a family that once lived there and founded the community. We walked through the church cemetary, full of some of the oldest, worn headstones I’ve ever seen, past a tree-shaded pond and around to the ruins of what was once the Lovell manor house. I couldn’t help remembering when Caroline and I were in Ireland and we’d jerk the car over every five seconds to excitedly point out “a ruin!” 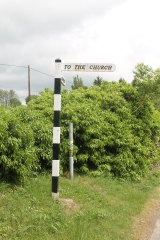 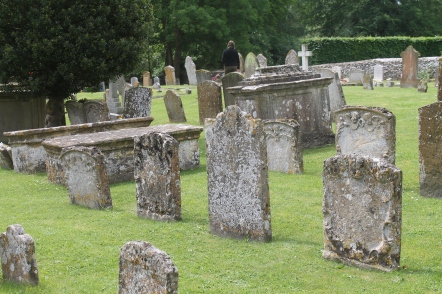 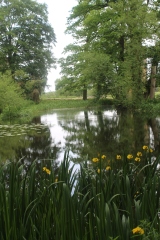 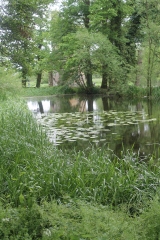 Minster Lovell Hall is about as much of a ruin as you can get — only part of the structure is still standing, and the rest of the house is only apparent from the outline of the stone foundation in the grass. We wandered the grounds, and Richard filled us in on what used to be there and what life was like in its heyday. The house had been restored in the first part of the 20th century, but after World War II, everything that wasn’t original was removed and it was allowed to decay to its present state. Even though that’s sort of sad, it’s really beautiful there. 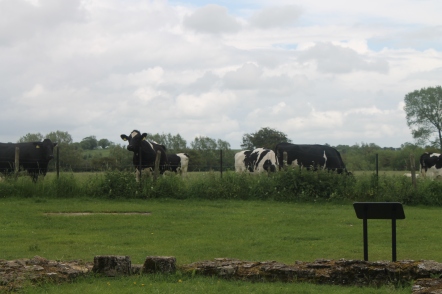 Back in the coach, we headed for the town of Burford. If ever there was a perfect little main street lined with quaint shops, this is it. We only had about an hour to explore and eat lunch, so I set out. First stop, though, was a public toilet, where you had to pay 10p to open the door. (Paddington Station has the same — 30p to walk through a turnstile and enter, even just to wash your hands.) I get the point, since it takes people and money to keep up a restroom, but it made me wonder: how would that go over here in the U.S.? Not well, I suppose.We likely consider free public restrooms on the list of unalienable rights.

I strolled along the main drag, occasionally ducking in to a shop/art gallery/food store that looked interesting. I had eaten a croissant and coffee at the station, so I wasn’t particularly hungry, but figured I should take the opportunity while it was there. Richard has recommended a tearoom/bakery called Huffkins, so I picked up a packaged sandwich — just ham, cheese and chutney on white bread. I stuck it in my bag and continued on, bypassing all the cute pastries, pies and cakes in the window. If only we’d had more time there! 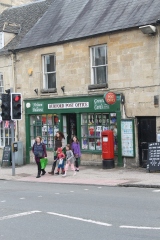 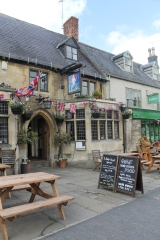 I ran into Trish, who’d just enjoyed a Ploughman’s lunch at the pub. It turns out that’s basically the type of sandwich I’d bought. She said they have Ploughman’s lunches in Australia too —  it’s a board of ham, cheese, chutney and a hunk of bread that you can eat with your hands. She and I wandered down “Church Lane” … and found a church, believe it or not. It was built in the 13th century, which is just hard to wrap my mind around. In the center aisle, they had laid a bed of carnations to commemorate QEII’s Jubilee. I took a spin around the church, past old pews, stained glass windows and graves in the floor. 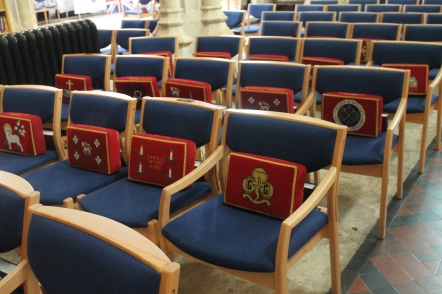 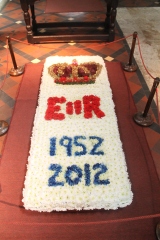 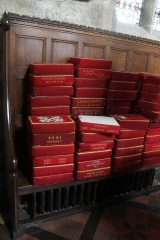 By this time, I had walked up an appetite. Even though I had my sandwich, I remembered seeing beef pies, called “pasties” (pronounced pass-tee) at the tearoom. When in Rome, right? So I ordered the “Cotswold” pasty filled with beef, gravy and vegetables — warm and delicious.

We reloaded the coach for the ride back to Oxford. After such a filling lunch, I almost dozed, but Richard regaled us with stories about student life at Oxford, its 38 colleges and different degree levels. Interestingly enough, Oxford is focused on a one-on-one education — students are required to meet with their assigned tutors in “tutorials,” and can, but don’t have to, attend lectures. They are accepted into and educated by one of the colleges, but exams are given by Oxford University, which is how they can say they obtain an Oxford U degree. Within those colleges, students live, dine and go to church there — completely enclosed. How different from our American system!

Once the coach let us off, we began the second walk of our day … Oxford and the university.