After the hub-bub died down in front of St. Paul’s, I walked in the other direction to get a better view of the church. Pretty soon I found myself on Fleet Street, but was lost and turned around. After the late revelry of the night before, I was hoping to find a Tube station that would whisk me back to my hotel, and specifically my bed. But the innumerable barricades along the streets prevented me from navigating in the direction I thought I should be going.

As I stood there confused, I noticed a significant amount of people still lining the barricades expectantly. I walked over to lean against one and look at my map, just as someone asked a police officer, “What time will they be coming by?”

It seems the Queen and the senior royals would be passing from reception to luncheon along that very path just 20 minutes later. I planted myself there to wait.

This news didn’t seem to be common knowledge and there weren’t many people around, so I had a prime,  front row view all the way up the street toward St. Paul’s. Sure enough, about 12:45 p.m., we started to hear the crowds cheering, and cars appeared on the horizon.

Now, if I had been smarter at all, I would have just videoed the whole thing on the iPhone, and it would have been spectacular. But, no. I wanted the perfect photo op with my handy-dandy camera, and I ended up missing most of it. On film, anyway. I did try to stay in the moment, not hidden behind the camera lens, so I actually saw the whole procession. The first car carrying Prince Charles, Camilla and Harry whisked by. Behind them, William and Kate. She was streetside, right by me, only four or five feet away. And when she started to look in my direction, I got nervous, which now I find kind of hilarious.

About a minute later, the Queen passed. Right there in front of me. 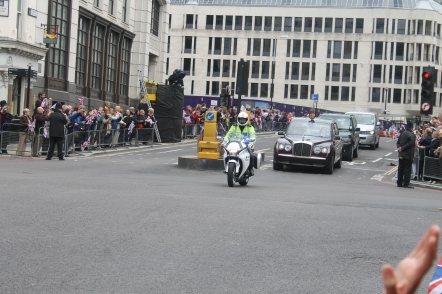 It was totally dumb luck that I was on that street corner, at that moment, but it was perhaps the highlight of the entire trip.

Afterwards, I couldn’t stomach going to stand in another crowd for several hours along the Mall, where the carriage procession would take place in the afternoon. So, I grabbed lunch and hurried into the safety of my bed to watch it all on television. Oddly enough, that’s exactly what we did 10 years ago. And I had the best view. Plus, it started raining in full force just after the balcony appearance.

My view of the RAF flyover, from the hotel.

I took a nap, then stayed in for the night, since the rain, now heavy, continued. After four full days of excitement, I needed to recharge.