Monday was my birthday, so I planned to take it a bit easier and enjoy life. The only Jubilee-related celebration that day was the evening concert at Buckingham Palace, but only U.K. residents could score tickets, and in a lottery at that. I had thought about pitching a blanket to watch the concert in Hyde Park, but the weather was just too unpredictable.

I had breakfast at a little cafe by my hotel, Carmina Cafe, that was good, hot and filling — poached eggs with roasted tomato, goat cheese and rocket (arugula), toast and coffee. I actually had really excellent coffee the entire time I was in London — definitely a highlight.

For the morning, I pre-booked tickets to Kensington Palace, which was refurbished and reopened just recently. As I walked over from the Tube, the weather looked weirdly menacing but held. 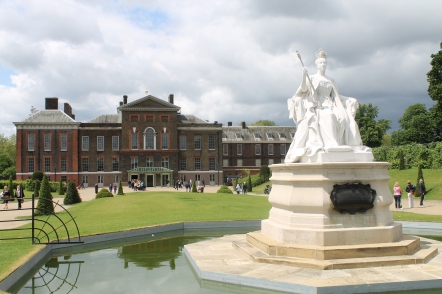 The lines were long, but a guide rescued me and led me to the pre-booked desk, so I went right through. There were tons of people inside as well, but I tried to make my way around without too much jostling. Kensington Palace only has a few exhibits — the King’s Apartments, the Queen’s Apartments, a special jubilee exhibit on Queen Victoria and a room devoted to Princess Diana — but I thought I saw more last time. The Apartments were fairly underwhelming, and I cleared those in only a few minutes. The Victoria exhibit was much more interesting — Queen Victoria (QEII’s great-great-grandmother) is the only other British monarch to celebrate a Diamond Jubilee, 60 years on the throne. She also grew up at Kensington Palace, the daughter of the king’s brother, the Duke of Kent. When the king died, she took the throne and moved into Buckingham Palace. So, lots of artifacts from her childhood and life are on display, even a sweet exhibit about her devotion to her husband (and first cousin) Prince Albert, with whom she had nine children. After he died prematurely, she wore black in mourning for the rest of her life, 40-something years.

Early on I began to notice something odd about the new exhibits at Kensington Palace. There’s an increased level of interactivity for sure — like some playing cards you collect along the way that are supposed to give you a coded message at the end, period clothing you could try on, bags of “artifacts” for children to explore. But it all had a distinctly dark, mysterious yet whimsical feel that sort of turned me off. For example, you are encouraged to sit at the windows so “the walls can whisper” facts about the palace to you. Creepy.

One bedroom held a canopy bed you could sit under and watch a trippy video about “the little prince’s dreams.” From there, you went into a dark room that was lit only by these weird dollhouse windows. 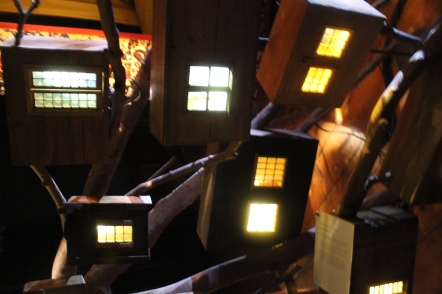 It got worse in Victoria’s exhibit. There was a huge display of items from her Diamond Jubilee, which I thought was pretty special. China, posters, clothing — all cool. Then I walked into a room with these long, white strips of fabric hanging from the ceiling. The floor said, ‘stand here to watch the queen go by.’ “Ok,” I thought, expecting to see some early photographic footage of Queen Victoria’s jubilee procession. Nope, it was a video of cartoonish crown and coach icons going across the screen. Say, what? 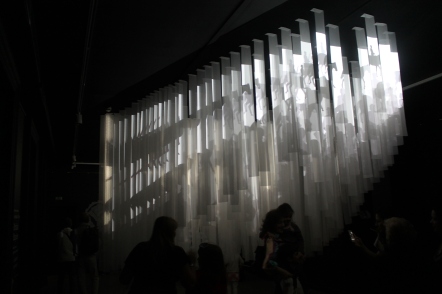 Creepy projection of “the queen’s jubilee.” 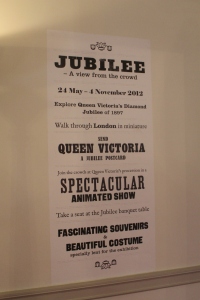 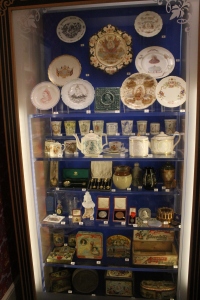 A cardboard version of London, also shown at Victoria’s Jubilee. 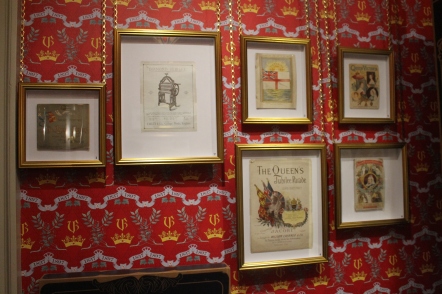 Lastly I wound my way to the Princess Diana display, through a hallway lined with cartoonish, sketch-like depictions of her. Her entire exhibit is one room, containing five dresses, a few photos and some fashion designer renderings. I’m sure the rest of her famous dress collection is off touring the world somewhere, but the exhibit seemed an afterthought. Kind of impersonal for such a famous woman who actually lived there, and raised the future king there no less. 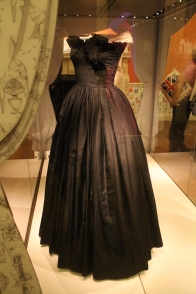 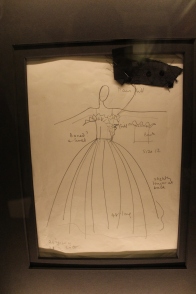 After the palace, I strolled through Hyde Park. Eric had talked me out of going on the London Walks tour of the Olympics stuff, and I’m glad I didn’t make the time for it. As he said, it would probably be a bunch of big, empty arenas in a not-so-good or scenic part of town. As a matter of fact, I didn’t see much Olympics stuff the entire time I was there — only a few Tube signs appealing to residents to help “clean up our city” before the games later this summer.

On my park meandering, I happened on the Diana, Princess of Wales, Memorial Fountain. Well, it’s a big loop of cement through which water flows — at times smoothly and calmly, at times bubbly and a little violently. I tried not to read too much into that as a metaphor for her life. Families and children definitely love it, as they jumped through the water or dangled their feet into it despite the cool and blustery weather. 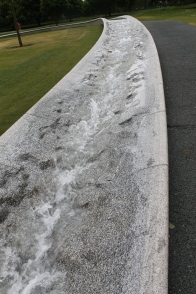