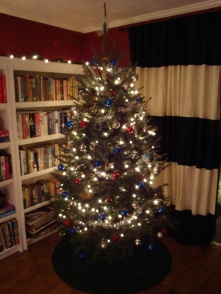 I have just realized, as we head toward Christmas and another turn of the year, that 2011 has been quite a transitional year. Most of my pursuits and priorities in December were actually unfathomable to me back in January.

I mean, Oliver joined me in March.

I went to South Africa in May — and if you had told me that I would cross the equator twice to Australia and South Africa in one calendar year, I would have rolled my eyes at you.

I got a new job in July.

Then a couple of weeks ago I (finally) finished my MBA after 3+ years of nose to the grindstone and personal sacrifices. I will desperately miss the learning and the family I found there … but maybe not for a few more months.

I failed miserably at most of my 2011 resolution list, but I had a lot of fun along the way. I made new friends. I realized that other friendships die a slow death when you don’t tend to them. And sometimes that’s okay. It is a two-way street, after all.

If I had moved or gotten married this year, I would have neared completing the top 5 list of most stressful things in life. I always understood that what doesn’t kill you makes you stronger, but I never meant to actually test those limits.

In 2011, five new babies entered my life, and three more are on the way (that we know about) in 2012. I plan to spend most of next year not just squeezing babies but also reintroducing myself to my friends, my kitchen, my bookshelf, maybe an airplane cabin or two, and to continue to share those experiences with you.

So, I hope you all have a wonderful, relaxing holiday season with your friends and families. I know I will.

Just watch out for rats on Christmas morning. (I know I will.)

2 thoughts on “Reflections of the way life used to be.”