Today, I just learned as it comes to a close, is National Grammar Day!

If I’d known earlier, I would have thrown a celebration. With cake. And cocktails. And toasts to the few who get it right. Remember back when Facebook had a group called “I judge you when you use poor grammar”? Well, I do. Judge you, that is. 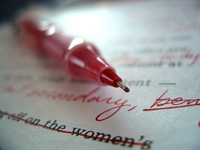 About 97% of my job on any given day is to edit other people’s writing, to catch typos, correct spelling and make the written word sound as smooth, intelligent and consistent as possible. I see a lot of carnage. At those times, I bless my librarian mother, my English-teaching grandmother and my mean-old journalism professors who gave no mercy when I violated the King’s English. It was brutal, yet effective, training.

You’ve heard me opine the downfall of grammar in America, which I’m pretty sure is leading us closer to the apocalypse, so I won’t ramble on about that again. I will take this moment to point out a few of my grammar pet peeves. Some people dispute these, and that’s fine. It won’t be the first time grammar or punctuation rules have changed on me. [Sidebar:  as long as I’m writing on a blog, not publishing in The New York Times, I’m going to start sentences with as many “ands” and “buts” as I feel like.] But, I digress:

Now I step off of my high horse. And lest you be disgusted by my outright display of snobbery, I’ll confess to shortcomings of my own. I certainly am not perfect; there are probably 32 mistakes in this post alone. Sometimes I make up words for my own entertainment, like “ridiculocity.” As in, “the ridiculocity of this place is astounding.” And that “who” vs. “whom” thing … I can’t ever get that right. That’s something to work on before next year’s Grammar Day.