When I was in London in June, I talked with my cousin Eric about the things I wanted to do while I was there. He had all kinds of ideas for me, steering me away from places I thought I should see but suggesting others that were little known.  He had gleaned much of this knowledge about London, he explained, just by wandering and exploring. It’s something he’d done in every city in which he’d lived — Boston, Hong Kong, New York, now London — seeking out, planning and then actually visiting historical sites, neighborhoods and restaurants around town. (That’s also why he recommended the book he told me about.) Just before I visited, Eric and his wife Jenmon took a private tour of Parliament through their M.P., and a few weeks later were going to see the Cutty Sark in Greenwich. He very purposefully doesn’t take the places he lives for granted, which I think is rare, and admirable.

I focused, of course, on how I spend a whole lot of nights and weekends: just flopped down on the couch. As the years have passed by, I haven’t taken proper advantage of the historical and cultural gems right in my own backyard. I mean, I lived in NYC for nearly 8 years and never saw the Bronx Zoo, the Hamptons OR Coney Island.

It’s a travesty, I realize.

So, inspired by Eric and in the spirit of my other “adventure” lists, I sat down to create a local list for myself — one I will call “Playing Tourist at Home.” It’s a work in progress, but it encapsulates all the things I want to see and do right here in the Charlotte metro, and likely wouldn’t without motivation. It seems like the right time to make the effort, now that school’s behind me and I’m recapturing my hobbies and social life. So hold me accountable — I will respond to that.

As luck would have it, an occasion to accomplish one item on this list recently completely fell in my lap.

A couple of weekends ago, I was invited to visit a local winery, Childress Vineyards, which is about an hour north of Charlotte in Lexington, N.C. For awhile now, North Carolina has been a burgeoning wine state, and vineyards and wineries are popping up all over the place. Even growing grapes in your backyard and making your own wine is becoming quite the thing.

The day we went to Childress turned out to be the hottest day of the year (and the hottest in my recent memory): a high of 105° F. But, I told myself, I’m always up for an adventure. And I was thrilled to see that the whole place is air conditioned. (Okay…I checked on that before we left.) 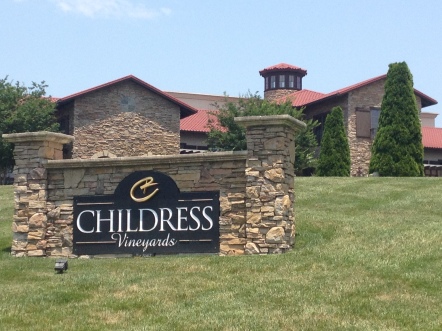 Though it was sweltering, it was actually a beautiful day — crystal clear and sunny, which just highlighted the vineyard’s extraordinary beauty. It’s like a Tuscan estate tucked  into the countryside of North Carolina. Childress Vineyards is owned by NASCAR racing owner Richard Childress; he lives nearby and even keeps vines in his yard that are used to produce the most exclusive of the Childress wines.

Now, I cannot stress enough how “out in the middle of nowhere” the vineyard appears — at least from the one minute drive between highway exit and winery driveway. But, that day it was a destination — probably more so because of the heat. It was packed. As we entered through enormous, ornately carved wooden doors, we stepped into a stone entryway complete with fountain. A four-piece band was playing music just ahead of us, and tons of people were milling about: tasting frozen wine concoctions at the “bar,” eating lunch, browsing the gift store. Since we were a fairly large group of 14, we put our name in for lunch (with at least an hour’s wait) and went ahead to the wine tasting.

We divided into two groups based on our wine preferences — a “Cellar Select” tasting for those who like sweeter wines, and a “Barrel Select” tasting for those who like dryer, more premium wines. I probably tend towards sweeter wines, but I’ll really drink anything and wanted to make sure I experienced the best Childress had to offer. So, while the majority chose the Cellar Select Series, I joined three more experimental wine drinkers for the Barrel Select. The tastings are all conducted at a long bar adjacent to the gift store, so we were all able to stand together anyway. The wines were all good — though nothing was extraordinary enough that I couldn’t leave the winery without purchasing. Perhaps Trader Joe’s has ruined me to buying any bottle over $7.00.

After the wine tasting, we moved our tipsy selves to the dining area for lunch. The dining room looks out over the acres of grapevines — a beautiful view. On a better day, you can even sit outside on the lawn to enjoy your meal. Since I had driven and we had to be back in town at a certain time, we didn’t linger over a bottle of wine at lunch. We just glared jealously at all the other patrons nearby who were doing so.

After killing about an hour wandering through the gift shop and ducking outside for a few minutes at a time until we couldn’t take the heat anymore, we gathered for the vineyard tour. I’m not sure if they cut the tour short because of the weather, but it only took about 20 minutes. Blissfully, we were only outside for about five of those minutes before we headed into the chilled warehouse to see the wine manufacturing process. As we walked down the stone steps and across the lawn on our way there, though, we passed a group of staff members assembling white, folding event chairs. There was to be a wedding there at 6:30 p.m. Right there in the blistering sun at 105 degrees. Bless their poor souls.

Our tour guide explained that North Carolina used to be the top producing wine state, until Prohibition in the 1920s. After it was repealed in the 1930s, California popped up as the go-to wine producer, but North Carolina is trying to catch up. We apparently have good weather for all types of grapes, though the humidity in the summer can wreak havoc. Muscadine wine, which I didn’t taste but Childress sells, is a homegrown North Carolina product, primarily grown and produced in the Eastern/coastal part of the state. I think Childress buys grapes from that area to make their wine, but grows everything else on that property.

Richard Childress is committed to only making, and even bottling, local wine — home vintners can bring their own wine there for bottling, but only if the grapes were grown in North Carolina. That’s a nice touch, the local angle. 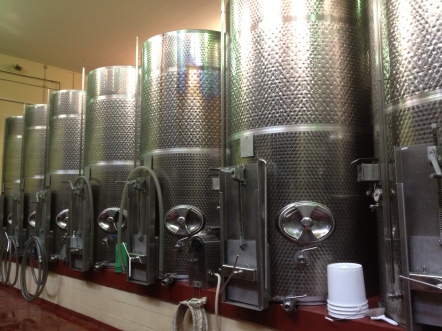 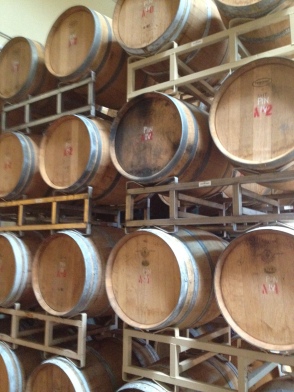 After the tour, we loaded cars and headed home. It had been a lovely day — an easy drive, a fun excursion and a nice distraction from the heat of the day. There are a whole host of other wineries nearby — clustered near the Winston-Salem/Greensboro area, around Hendersonville and Asheville in the mountains, about two hours north near the Virginia border and even more out at the coast along the beaches. They literally dot the entire state — mountains to the sea. So, more N.C. vineyards are on my list — tourist excursions for another day.

Here’s where it starts to get heavy. On Day 4 at the Solms-Delta winery, we began to delve deeper into the issues of race and culture in South Africa today. It’s definitely a country in transition, still reeling from its history of apartheid. But while I expected an unstable, even corrupt and crime-ridden society, instead I witnessed one full of hope, optimism and possibility, even while the future is very much unknown.

On Day 5, following our obligatory omelet and breakfast spread, we packed our emergency box of pastries and headed to Eerste River, a colored community on the outskirts of Cape Town. Our appointment was at the Eerste River Hospital, where we were to meet hospital CEO Dr. Visser. South Africa operates a state health system, and the country deals with many health issues, including AIDS and outbreaks of tuberculosis that have been exacerbated by the AIDS situation. South Africa’s previous president Thabo Mbeki was considered an AIDS denialist, and while he was in office his personal philosophy became government policy. During that time, necessary antiretrovirals were denied to hospitals trying to treat AIDS patients. Under current president Jacob Zuma, that policy has been reversed; though, after being accused of rape by an AIDS activist and declaring it to be consensual, Zuma stated that he did not take precautions since he “took a hot shower.” I’m sure that sort of misinformation isn’t helping the matter.