Happy New Year, everyone! I hope you enjoyed some restful yet festive time with your loved ones over the holidays, and that 2014 holds exciting things for all of us.

I’m not really one for making New Year’s resolutions, since I can’t keep them past January 8. But I applaud all of you who do and can. A weird thing happened, though. I unknowingly made a resolution in May, on a normal Saturday afternoon, a time of absolutely no significance, and I stuck to it. I started exercising — consistently. (Trust me, no one is more surprised than I.)

And now I am athletic and outdoorsy.

Well, let me qualify. I am outdoorsy when:

Only a few stipulations.

Five (closing in on six?!?) years ago, I was a city girl. I walked everywhere. I climbed about 17 flights of stairs every day. I hauled an enormous bag that held everything I could possibly need to be prepared for any situation I could encounter. I even owned a gym membership and sometimes even used it (okay, four times). I was active, and I was decently strong.

Then I moved to the South, to the ‘burbs. The land of cars and commuting and intermittent sidewalks. I really missed walking, but I had little excuse to do it when all I really wanted to do was lay on my couch at the end of a tiring day. And my unreliable employment and tuition bills didn’t warrant a still-eye-wateringly-expensive gym membership. So I went flabby and unexercised.

When Oliver entered my life, I suddenly had to take him on walks every day. I started to build up my stamina, but I was still winded walking up stairs or the slight incline at the end of my street. When a friend invited me on a kayaking trip, I wanted to go, but I was honestly worried whether I could physically keep up. Whether I would become embarrassingly fatigued or fall in the river and not be able to rescue myself. It was a breaking point.

In the spring, a friend told me about Flywheel, an intense spin class she’d been attending. The more she talked, the more appealing it sounded. Not because I wanted to exercise but because you have to make reservations in advance (accountability!) and you cycle in the dark to loud music (no judgment!). I’ve been riding since May, and anyone who’s been in earshot of me can tell you I’m obsessed. It’s the most regular exercise I’ve ever done, and I love it. The pounds aren’t melting away exactly, but my body is reshaping itself a bit. The most important part is that I feel able, even to climb a mountain. 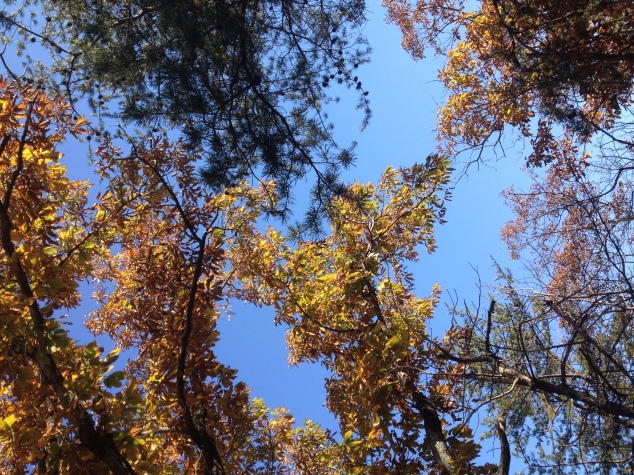 On an agreeable day (see criteria above) in October, my friend Stephanie and I went for a walk in the woods on our way to climb a mountain — Crowders, that is. Crowders Mountain, a scant hour away, is a popular destination for the outdoorsy, sporty set from Charlotte/Columbia/Greenville/Spartanburg and thereabouts. Despite living in this area for most of my life, I’d never been.

Physical limitations aside, I’m also terrified of heights. I get that weak-kneed, trembly vertigo thing when I’m at high altitudes — in the mountains especially, but strangely enough not in skyscraper buildings. (Thank you, NYC.) You should do things in your life that scare you, though, so we set out on the trail at Crowders.

All was going fine for the first hour — the terrain was steep and challenging, but we were surrounded by vivid, beautiful fall foliage and spindly trees. We huffed and puffed and groaned and ached up an infamous set of 113 stairs to the pinnacle of the mountain.

The view was breathtaking, with a tiny blip on the horizon representing Charlotte’s uptown skyline — though I stayed as far from the edge as possible. As I said, I’m not very brave when it comes to cliffs. 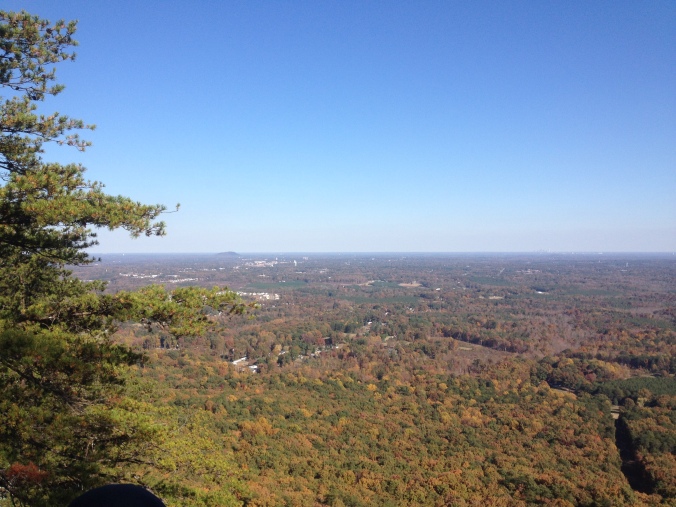 After soaking in the view for a couple of minutes, we headed back down. I didn’t think my wobbly knees could take the endless staircase again, so we chose another route. At certain points in our lives we can make great choices that lead to happiness and victory. Or we can make choices that lead straight to hell. This was one such terrible decision.

We’d heard conflicting information about the Rocktop Trail —  that it was daunting from one hiker and that it was no big deal from another. Well, I’m here to declare: it’s. a very. BIG. DEAL.

The initial winding gravel road made me think this was going to be a breeze. Until we hit the rocks. They went on forever. I’m proud to say I only had two panic attacks — one on a little hop across some boulders where my overactive imagination convinced me I would slip off and cascade down the mountainside. (I didn’t.) The other at a pass where some trail designer expected me to walk across a two-foot-wide rock bridge with nothing. on. either. side. Oh, except for that several-mile-long drop to my death.

Just as I was beginning my panic attack and seriously considering crawling across on my hands and knees, another trekker told us we could actually turn back and walk down and around it. I nearly made out with him in gratitude.

It was a good thing he came along since that teeny, treacherous path culminated in sheer 10-foot drop down the rock face. From the path on the other side, we just gaped at it in horror. Surely that was in error? Maybe we took a wrong turn? But, no. There it was. The ridiculous red dot marking the official trail path. They really expect you to walk over the rock bridge and jump down a mini-cliff.

The rest of the trail required us to scale more pretty serious rocks, but they seemed easy — fun, even — in comparison. Back at sea level, I realized that by 3:00 pm in the afternoon I’d already climbed a mountain. That’s a bit more of an accomplishment than the hours of TV I cycle through most weekends. 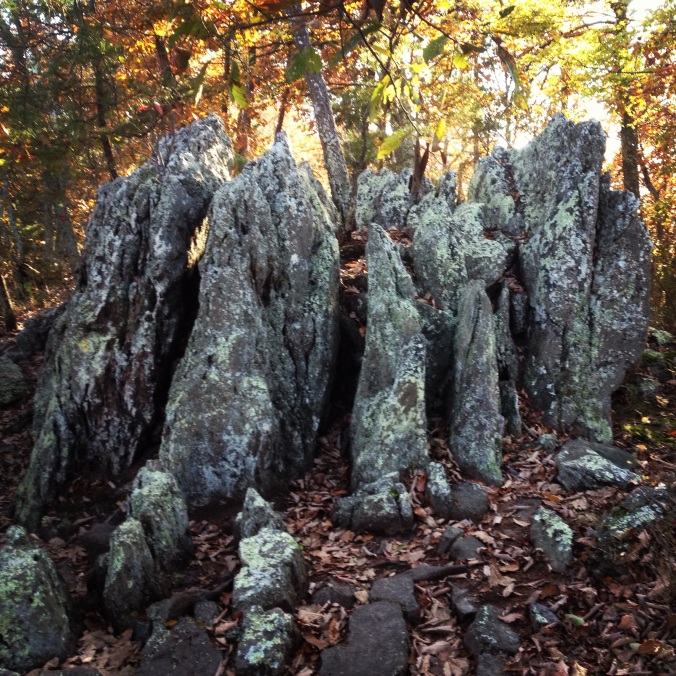 Accomplishment is actually an understatement — even though my legs and lungs were sore, I was invigorated. I wouldn’t have had the stamina just a few months before. But I did it.

Now I realize, I might never be thin. I’d much rather be strong. But I am undoubtedly capable.

5 thoughts on “Taking a walk in the woods.”