You know when you talk about doing something for so long, and when it finally happens it feels surreal? That was our trip to San Antonio a couple of weekends ago. We’ve been saying for years that we wanted to go see family there. Finally, the timing and our motivation was in sync.

I’d never actually been to the “great state of Texas” before. (That’s how they say it. Not just “Texas,” but “the great state of Texas.”) I mean, I’d technically been to Dallas, well, Irving, a couple of times for work, but I saw the airport, the office, the hotel and the airport again. Maybe once I saw the tiny skyline of Dallas on the horizon. So I don’t think that counts.

We spent four jam-packed days, with plenty of touring and eating, but also great times with family. I wouldn’t call San Antonio a pretty city, except for downtown and the Riverwalk, but I am in love with the weather. It was mid-to-high 60s in the middle of a February winter. The skies were clear and the air was nearly humidity free. That’s weather this girl from the South basks in whenever I can get near it.

I think our trip also felt surreal because it’s an example of how you can travel to parts of the U.S. that feel familiar, but also like a totally different culture. I love that about our country. And even though Texas is considered southern in some circles, it is a very different thing. My first inkling that I wasn’t in Kansas, or North Carolina, anymore was how normal it is for women to wear cowboy hats while running errands. Those Texans live up to their hype as God-fearing, gun-toting, big-living, barbecue-eating yet fun-loving and friendly folk.

So, what do you do on a weekend in San Antonio? Here are a few ideas.

At Shepler’s or Cavender’s. You comb through hundreds of sizes and styles. Let me say, though, when you get them right, cowboy boots are very comfortable. I totally get it now.

I didn’t take pictures of it, but we ate a hearty meal of brisket and ribs at Grady’s. Texas bbq is good, but all the beef was a little jarring to this Carolinian, who’s used to strictly pork bbq — pulled, ribs and otherwise.

However, I hear that some of the best barbecue in the country is at Franklin Barbecue in Austin, a scant hour’s ride away from San Antonio. That’s for next time.

3. You drink the local brew.

Like Shiner Bock, which is made in nearby Shiner, TX.

We were lucky enough to accidentally plan our trip during rodeo time. We got tickets at the last minute and sat up near the rafters, but it was a blast. Certainly an experience, but I loved every minute — four hours of bronco bucking and cow roping. We ate bad stadium nachos and cheered on the cowboys. How in the world do they not break their legs, backs and necks? They deserve every bit of spare change they earn, I tell you. 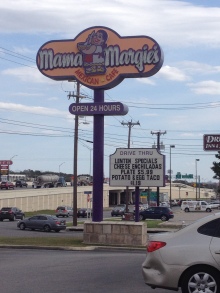 We took a little excursion to a Mexican grocery in search of this special vanilla. My cousin, who is quite the foodie and cook, swears that this vanilla is the best. I brought some back with me and can’t wait to try it out. 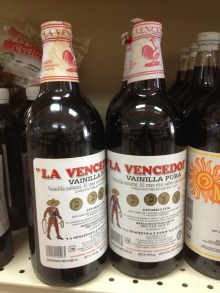 7. You see the boots at the North Star Mall.

It’s a must, even if you’re just passing them on the interstate. I don’t think you’re supposed to say you really visited San Antonio unless you see them. 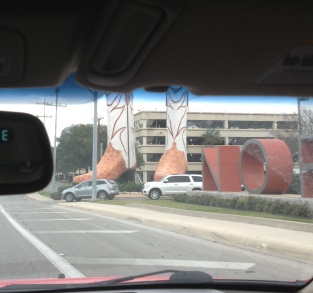 8. You stroll the Riverwalk.

Downtown San Antonio’s Riverwalk is every bit worth seeing. It’s lush and contained and peaceful, except on a busy Saturday night. Then I’m not sure how everyone doesn’t fall in the river on those exposed, narrow walkways. 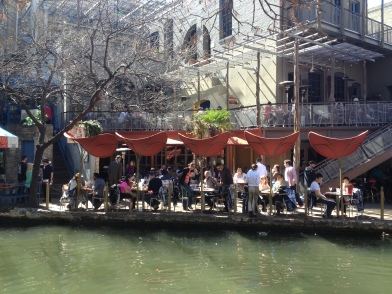 9. You take a river boat cruise.

It’s the best way to see all the sights of the Riverwalk. And ducks. Lots of ducks.

Before this trip, the only thing I knew about the Alamo was that some guy named Davy Crockett was involved. And that everyone died. The site is smack-dab in the middle of downtown, so it’s a little hard to visualize the rebels holed up in this outpost on the Texas frontier. But I’m glad I saw it — it certainly played a pivotal part in Texan (and American) history. 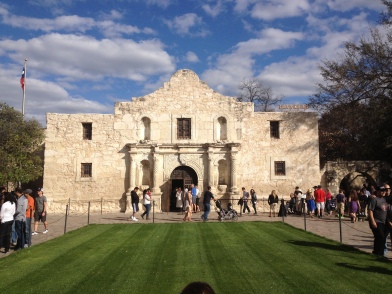 This is another insider tip from the locals. H-E-B is apparently the only grocery store chain in town, and it’s so popular — indeed, has so cornered the market — that other grocery companies haven’t been successful there. H.E.B. are the initials of the founder, and they’ve expanded into other arenas, like with H-E-B plus, a Target-like home goods store. My family swears by the ready-made H-E-B guacamole, says it’s incredible.

12. You eat at Whataburger.

We didn’t, but I understand that this is another primary stop on a tour of San Antonio. Whataburger is a hometown fast-food burger chain, comparable to In-N-Out Burger on the west coast. I can get on board with that.

Like any good trip, we accomplished a lot but left a few things to come back to. And next time, we won’t miss Austin, I hope.

8 thoughts on “Deep in the heart of Texas.”