I’m freshly back from my London Jubilee/birthday excursion, and missing it already. That’s a little unusual, because as much as I am enamored with British culture, television, tea, accents, history and the royal family … I’ve just never really liked London. On this trip, though, I think the love affair began.

London’s such an easy city — to get to, to get around in, to visit alone. Though it’s nothing like New York, I felt a distinct and similar cityness — on the tube, in the hum of commuter rush hour, in just its oldness. But in that, of course, New York has nothing on London. I just felt surprisingly comfortable, and loved being back in the middle of the bustling city — you know I can throw an elbow in a crowd, hurl myself into a packed train car and speedwalk past the tourists with the best of them.

Now, it wasn’t a relaxing holiday, not like laying on a Caribbean beach with a mai tai for a week. And I killed it, every day, which means I made it through most of the sites on my to do list. It also means I hardly slept, mostly because I never acclimated to GMT. It sure made the coming home easier though — no early waking and to bed at 8 pm for me.

Anyway, I had a blast. It went so smoothly, and I did all the fun things I wanted. I also caught up with family and met a ton of great people from all over the world, which never would have happened if I’d been traveling with someone. So, here it is: London in review.

I get totally freaked out by plane travel. Especially when there’s a period over open sea, at night. I sort of understand that these pilots and airplane manufacturers know what they’re doing, but I’ve also met a lot of pilots. Enough said. So, my trip began with a foray into the US Airways Club …. where have you been all my life?? I greased the wheels with a couple of free Chardonnays before heading to the gate, and despite our unpredictable summer thunderstorm weather, we took off on time.

The best news of the day was the upgraded plane with in-seat entertainment systems. You know my South African Airways story, so I was not excited about the prospect of another long flight with nothing to amuse me. I had loaded my iPad as backup, though. I met my lovely seatmate, a woman named Mona from Ohio who was going to spend three weeks with her children in London, Germany and Italy. Her son is stationed at a U.S. airbase north of London. She and I chatted on and off, never annoyingly so, and she told me all kinds of interesting stories about her life and her children. It was a nice start to the trip. I watched a few movies, ate a decent in-flight meal and tried to sleep. All told, I probably dozed for 45 minutes, but what are you going to do?

We landed about 7:00 a.m. in a cloud and were greeted by overcast, misty London. Well, whatever part Gatwick’s in. In a whirlwind of no time at all, I cleared customs, picked up my bag, hopped the train to London Victoria, climbed into a taxi and checked in to my hotel. All by 8:30 a.m. Luck be a lady. I had time to shower and feel human again, to eat my £15 hotel breakfast of coffee, yogurt and fruit, and make my way to Notting Hill. 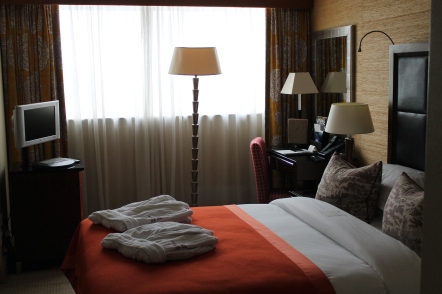 When I was doing all my research, I found a company called London Walks, which is most famous for the nightly Jack the Ripper tour. Well, they do walking tours all over London, and even outside, as I’ll come to tell you. I had never seen Notting Hill, and the walk is only on Saturday at 10:45 a.m. I never thought I’d make it, but the stars aligned in my arrival, and I joined the group at the Holland Park station. While waiting for the guide, I met a couple from Melbourne, Australia, who were traveling Europe for three weeks — all these Europeans and Australians who get six weeks of vacation really make me sad for us in overworked America. Sheesh.

Simon the guide came and walked us through all of Notting Hill, past beautiful stone rowhouses, quaint shops and key gardens. Past all the appropriately touristy “Notting Hill” movie attractions. The weather held, but there was some weird pollen in the air that attacked each of us at one time or another. We ended the tour through Portobello Road market, which is just as geared to tourists as to antique collectors. The crowds were there for the Saturday buying frenzy, and our group did lose a few shoppers along the way. Simon walked us all the way back to the Notting Hill Gate tube stop, but I wanted to spend some time in the market. So, I said goodbye and winded my way back through the throngs of people. Ultimately I found myself at a silver table, where I spotted a three-piece Victorian, plated tea set I had to have. If there’s one thing I learned in South Africa, it’s buy fast and buy often — just don’t think about it. That purchase was probably no deal or investment, but it sure is pretty. 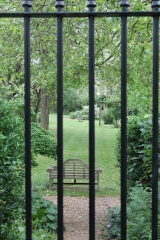 Revelers putting up their Jubilee bunting. 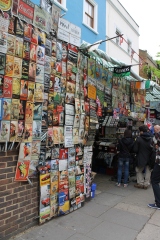 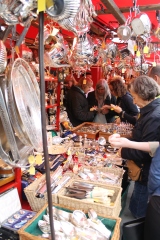 I grabbed a quick lunch, then dashed into the tube for my next adventure.

I emerged at Tower Hill. I should note that at this point I was surprisingly lucid. I always advocate taking the tour buses on the first day of jetlag, but I think the walking tour did one better. You just have to keep putting one foot in front of the other, literally. My mission was not really to visit the Tower of London, which I hadn’t seen in at least two trips, nor the Crown Jewels. I wanted to see the crystal jewel that the queen would use to light beacons on Monday night in commemoration of her Jubilee … and maybe the Olympics? Anyway, it was only going to be there until Monday, and the Thames pageant on Sunday ruled out any visit to the Tower then.

I joined the Tower walking tour anyway, and learned about plenty of coronations, beheadings and beefeater history. While there, the sun peeked out for a moment and I was able to get some great views of picturesque Tower Bridge. There’s something very fairytale and whimsical about it. 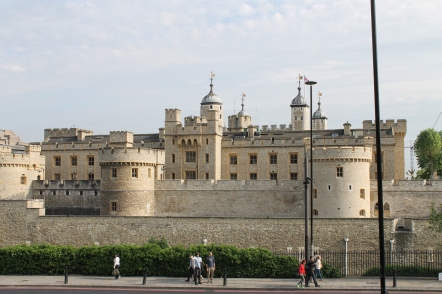 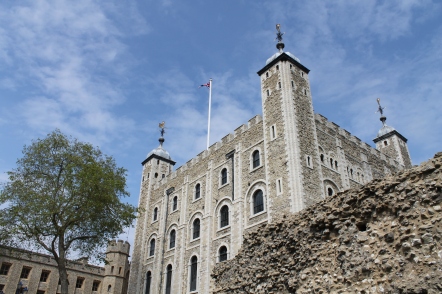 View of The City from the Tower. What is that building? It’s, um, oddly shaped.

In appreciation of the good weather for half a second, I sped over to Buckingham Palace, hoping to get another nice view. What I found was a construction zone — the Mall was blocked for pedestrian traffic and they were still assembling the stage and bleachers for Monday night’s Jubilee concert. 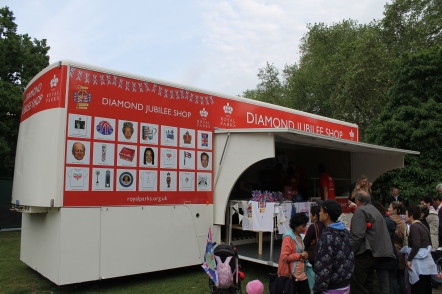 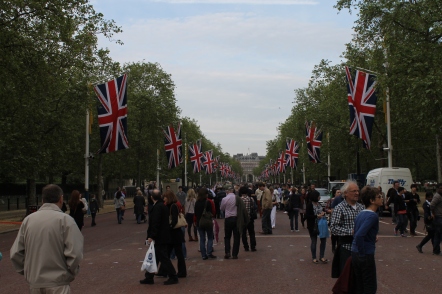 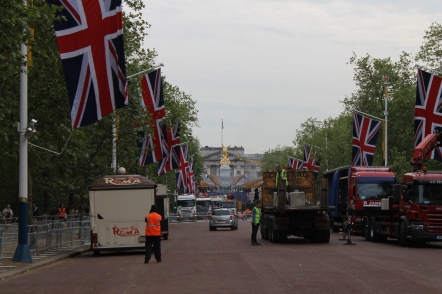 I walked down the Mall anyway and found myself stopped in a crowd by police in front of Clarence House, home to Prince Charles. We spent a few hilarious minutes excitedly murmuring to each other about who must be coming?!? And, oh, what’s that movement!?! Then two empty cars drove in. So we stood there another ten minutes, until one of the empty cars drove back out. The gates closed, the police opened the road and the crowd disappointingly dispersed. All that buildup for nothing. 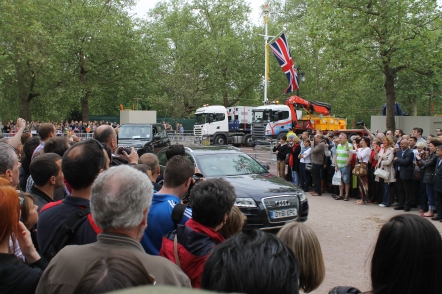 And, a car exits.

At this point I was nearly comatose and daydreaming (literally) about a bed and some room service. Back in my hotel room, I fell asleep standing up. And after that power nap, I couldn’t go to sleep again until after midnight. So it began.