When I negotiated for my house three years ago, I fought (and lost) a battle with the homeowners about the hideous, unworkable, 1970s sliding glass doors that surround my sunroom and patio. And I do mean “unworkable.” Of the four sets of doors, one completely wouldn’t open and the other three required Sampson’s supernatural strength to pull the glass partitions along their rough, rusting tracks.

Alas, some things you just come to live with.

Earlier this year, my dad in his retirement got a part-time job at Lowe’s … which lasted all of three weeks due to his dissatisfaction with things like “schedules,” “no smoking rules” and “customers.” But, that time allowed me to browse the door and window aisles with him. I realized that replacing sliding doors wasn’t nearly as expensive as I’d expected.

So, orders were placed, and like any dutiful daughter, I trusted my father when he promised, “Oh, sure. You and I can do the installation ourselves.” Now, my father — whose woodshop rivals Tim “the Tool Man” Taylor — raised a girl who is decently handy at minor home repair. Like putting furniture and equipment together. Like replacing hardware. Even like installing window air conditioners. Not like demoing and putting up drywall. However, I’ve been taught to respect my elders.

You should be relieved (as I was) that we quickly abandoned those ambitious ideas and hired (amateur) contractors to deal with the replacement of my doors. “One day” of work is now going on three, and my house is a shambles.

Once they removed the existing doors, the crew taped plastic sheeting around the empty openings. The next morning while they were sawing out some brick flooring, I opened the door to my living room to be greeted with a cloud of dust. The tape around the sheeting had come loose, and fine, red, brick dust was escaping — nay, being blown — directly into my house.

That grit is now ev.er.y.wh.ere.

On top of all surfaces. Under all furniture. Between books on the shelf and DVDs inside(!) the cabinet. Covering the floors. Probably inside the vents. 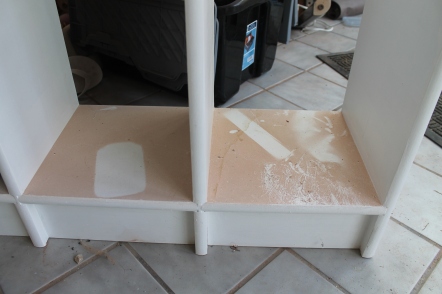 I regularly watch and enjoy home improvement shows on TV, but I never really wanted (or expected) to be living in one myself. And I don’t have access to the cleaning crews that inevitably sweep in after the renovations and leave the new decor spotless and shining. I think I might still be cleaning up this dust five years from now. Doesn’t that make you want to come visit? 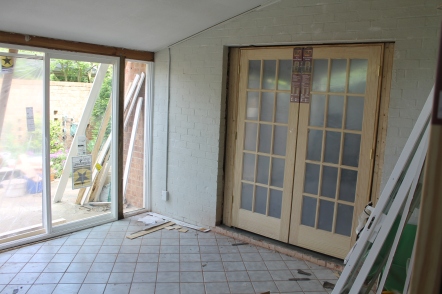 We (accidentally) started our own canine Walk of Fame.

I know it will be beautiful in the end, that this is the painful and chaotic period, but it reinforces my belief that I never want to work in construction. I mean, this is why people move out for home renovations. And mine seemed so simple, so easy, so quick.

But, perhaps that’s the price we pay for beauty.

5 thoughts on “The price we pay for beauty.”