Day 8 in South Africa marked the end of our “schoolwork” and the beginning of vacation — we were going on safari! You know, going on a safari was always on my bucket list, but I never really pushed it because I wasn’t sure how I was actually going to get to Africa. That’s why we should always leave ourselves open to new experiences, I guess. I put “safari” on a list, threw it out into the universe, and there I found myself, headed to the Entabeni game reserve in northern South Africa.

From Johannesburg, the ride to Entabeni was about 4 hours, and we were warned that the last 45 minutes would be on unpaved, dirt road. A true adventure! Exhaustion was at its height by this point, so most people welcomed the 4 hours to nap, but I was so excited to see the real landscape of South Africa. Because it was winter, everything was dry and brown, but still breathtakingly beautiful.

On the road to Entabeni.

Entabeni is in the Limpopo province, which is near but not in Kruger National Park. I think that’s where most people go on safari while in South Africa. We drove through a town that may have been Mokopane before entering the Waterburg mountains. The landscape became much more dry and dusty, even desert-like, with a strong, bright sun. It was the end of the rainy season, which meant that they would not expect more rain there until October (it was May). That’s a great departure from the weather in Cape Town, which has a Mediterranean climate.

Sure enough, we drove the last 19 miles on a bumpy, dirt road and pulled into Entabeni around 1:00 p.m. There were 4 game vehicles waiting to escort us from our bus to the lodge. We were all giddy from the naps, exhaustion and just general excitement so climbing into the vehicles was pretty surreal. I knew it wasn’t the safari ride at Disney, but I didn’t have a firm idea of where I was at all in the world. 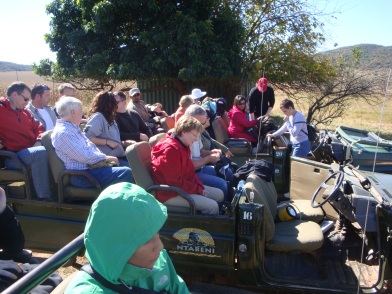 On the way to the lodge at Entabeni.

On the way to the lodge at Entabeni.

Giraffes, on the way to the lodge at Entabeni.

Our ride to the lodge was a mini game drive — we saw a family of giraffes grazing in the field. Once we got to the lodge and unloaded ourselves from the cars, a group of women in traditional African dress greeted us with songs and dancing, and we enjoyed a cool cocktail of layered juices (definitely grapefruit and something else) topped with a green cherry. Festive.

Being greeted at the lodge, Entabeni.

Our group shared one lodge, where we gathered, ate meals and just relaxed. We also were divided into 4 sleeping lodges that were about a 5-minute ride away. They cautioned us not to walk anywhere on the grounds — if we needed transport from our sleeping lodges to the main lodge, or vice versa, we were to call the front desk. I learned why the hard way, which I’ll tell a little later. Yep, definitely not Disney.

We ate lunch — a buffet of food to which we were now accustomed: stewed chicken and beef with rice and vegetables. Amazing homemade yeast bread. Ah-mah-zing. I ate at least two pieces at every meal. We encountered one new thing — a white asparagus-like vegetable on salad that tasted more like a fruit. And of course, the omnipresent malva pudding. 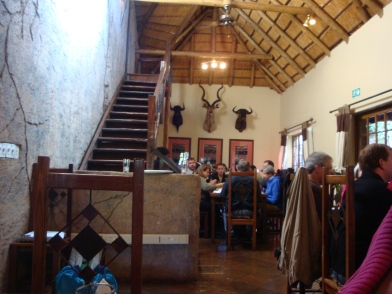 Lunch at the lodge, Entabeni. 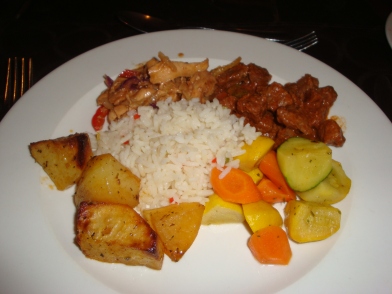 Lunch at the lodge, Entabeni.

After lunch a few of us took pictures of the lodge and views while we awaited transport to our rooms. We got excited about seeing a warthog just wandering the grounds and stepped in closer to take pictures. Then he saw us, got spooked and started to turn as if he would charge us. Who knows what he actually did, because we dropped cameras, screamed and ran. I think it probably hid from us too, which is hilarious. Again, this wasn’t Disney. And that’s not yet how I learned the animal lesson the hard way.

The warthog, snapped before “the incident.”

We rode to our rooms and explored our cabins. I may have mentioned that I don’t enjoy heights. Well, the lodges at Entabeni really tested me — they are basically perched on the side of a cliff, with a long wooden stairway that snakes its way from the top of the cliff to the rooms. I needed a Xanax just to make it to my door … and I’m not kidding. I really did take a couple, and prayed the whole way down. Once safely inside the room, we found a pretty rustic but well-furnished hut. The ceiling (well, roof) was thatch and windows looked out over the ravine. The floor pitched pretty heavily and there were a few small holes from which you could see to infinity, i.e. the bottom of the ravine. The shower only gave a trickle of water, which did nothing to warm us up from the chilly, dry weather. We were provided space heaters and heated blankets on the beds to keep it cozy.  It definitely wasn’t the five-star accommodations of the Mount Nelson or Westcliff but it was still luxurious “roughing it.” Our luggage had been delivered to our rooms, and we proceeded to dress in everything we owned in preparation for our first, evening game ride. That’s long underwear, corduroys, multiple sweaters, socks, coats, hats and gloves. Because it was going to be chilly. 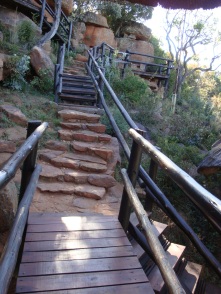 The stairs I survived, from our room at Entabeni.

The view from our cabins, Entabeni.

We returned to the lodge for four o’clock tea service — there was certainly no absence of feeding on this trip. Then we loaded our cars for the drive — our guide was Gareth, a very fine specimen of a bush man, and also a photographer on the side for BBC and African Geographic. Early on in the ride we saw two male impalas that looked like they were beginning to spar. Gareth jumped and grabbed the case on the seat next to him, which I was convinced was a rifle. But then he pulled out this huge camera with the longest lens known to man. Unfortunately, he didn’t get his shot that time.

Bundled and ready for our first ride, Entabeni.

We drove out into the plains, where the animals just wander wherever they feel. Two rhinos came right up to our vehicle. The guides told us that while we are in the car, the animals just see us as one, boxy unit. But if you stand, it breaks the silhouette and they can be threatened and charge. So we sat. On the ride we saw impala, more warthogs (not like Pumba at all), eland, one zebra and plenty of gnu (or wildebeest). We followed some elephant tracks for awhile, but never saw the beasts themselves. Same with predators — no leopards or jaguars. 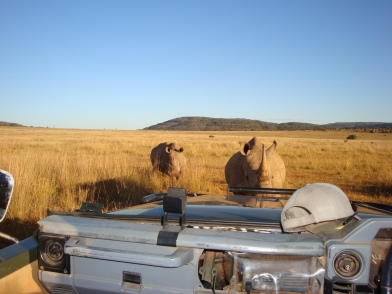 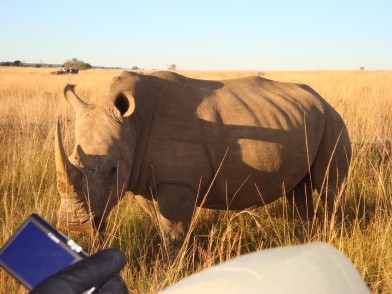 As the sun went down, we stopped for a “sundowner” of beer and photo ops with the Entebeni rock in the background. So beautiful. As we rode back to the lodge, we tracked the Milky Way galaxy, the Southern Cross, Scorpio chasing Orion, Gemini and Canis Major and Minor in the sky. As a Gemini myself, I don’t think I’d actually seen the constellation in person. What they say is true, though, the sky is so wide, dark and beautiful in Africa that you can see everything.

Gareth and his harem, Entabeni.

At the lodge, our dinner was slightly delayed so we hung out and chatted. Cathy, one of our professors, told us that she had seen Sandra Day O’Connor in the Westcliff having breakfast that morning! What are the chances. 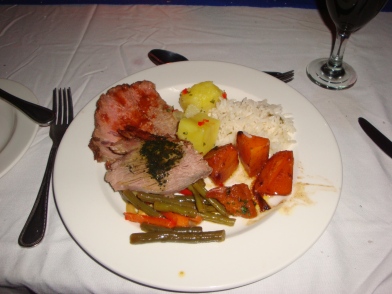 For dinner there were beets! (I love and adore beets.) Also more bread, roasted beef and lamb, rice, sweet and Irish potatoes. Malva pudding and creme brulee for dessert. We sat with Willy and our driver Johann, who shared more about living in South Africa. Johann had recently married a Dutch model and couldn’t wait to move to Holland with her. He was a little embittered about his life in South Africa, for reasons on which he didn’t elaborate and we didn’t ask. Willy told us that 10 years ago his wife had also been a tour guide but contracted malaria on a game ride in Kruger National Park and died within a couple of days. How horrifyingly tragic. Willy had a general sadness about him that I’m sure stemmed from that, but also from being a tour guide in general — he said that he spent time with groups like us, and got to know us so well for a week, but then we jet off back home and never see each other again. Whew, heavy.

We turned in really early that night because we had another game ride at 5:00 a.m. the next morning. Yes, 5:00 a.m., an hour at which I try never to be awake. But when in Africa….