I’m a little behind on the news, due to events beyond my control.  But in my sickly haze I’ve been keeping up with all the news on Prince William’s engagement to Kate Middleton. Hooray! I love a royal wedding.

Well, you know I actually love anything about royalty. And that’s apparently not a well-kept secret, since Heather called me last week for the lowdown on what all of this means. I’m informed on the royal goings-on, traditions and monarchical implications to a level that even surprises me. Let’s just say that I have trouble remembering the DuPont Identity formula, but I can give you a history of England’s royal succession during the past few hundred years on a moment’s notice. 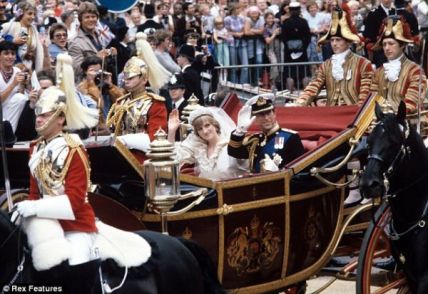 I don’t know why I’m so enamored by royalty — maybe it’s the fairy tale and the glamour, the pomp and circumstance, the observance and appreciation for history, social etiquette and tradition, or just the dynamics of a large, extended, dysfunctional family. One of my earliest memories is of getting up early to watch Princess Diana’s wedding with my mom — pretty amazing, since I was 4.

I’ve read a billion royal biographies, not only of the reigning British royals, but also the families of Russia, Jordan and even medieval England and Scotland. It’s interesting to see how people born to a profession prepare for and handle such leadership and power. After all, they’re the only people these days whose destiny and jobs are predetermined at birth — they don’t get to choose how to live like the rest of us. Some thrive; others don’t handle it so well. (Btw, I really want to see “The King’s Speech” with Colin Firth. I keep hearing it’s fantastic.)

I follow the British royals because I’m an unabashed Anglophile — I mean, Queen E and I are 21st cousins after all. My love of all things British started on the trip to England with my parents when I was nine.
We stayed in a hotel steps from Buckingham Palace, toured all around the city and took day trips to Windsor and Exeter by train. I developed an obsession with tea, scones and clotted cream, and even came home and named my dog after a British explorer. 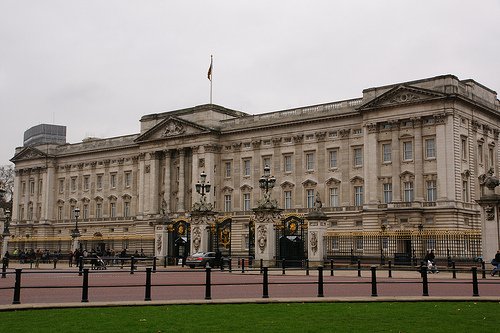 I don’t think I’ve actually ever traveled to England when it wasn’t royally related. That trip when I was nine was the summer Prince Andrew married Sarah Ferguson, and I still have their commemorative engagement booklet. In college, I rendezvoused in London with a group of friends, which just happened to fall on the week of the Queen Mum’s birthday. Fellow royal-obsessed Sue and I broke off from the group to watch the royal gun salute at Hyde Park and then strolled over to Buckingham Palace just in time to watch the Queen and Prince Philip leave in their car. Then we crossed to Clarence House and somehow nonchalantly walked past several checkpoints until we were next to the press camera setup. Right then, the entire royal family walked outside for their official media portrait. I have a blurry, over-the-crowd shot to prove it. Afterwards, I called my mom at 5 a.m. U.S. time to tell her that I could die now that I’d seen the royal family. Yeah, I can be a bit overly dramatic.

In 2002, the Queen was gracious enough to host her Golden Jubilee, celebrating 50 years on the throne, on my birthday. Mom and I stood in the crowds, waving our Union Jack and Jubilee flags and singing their patriotic hymns along with the rest of the loyal subjects. We were parked right in front of St. Paul’s Cathedral, with a full view of the royal procession, gilded coach and all. I have more blurry pictures of the royal family that day. When I came home, Sue was visiting NYC for the weekend and called me with tickets to a taping of Fergie’s (yes, Sarah Ferguson, Duchess of York) talk show pilot. Since it never aired (rightly so … disaster), we were privy to that historic endeavor and even got to take our picture with her. That’s a lot of royalty for one week!

So, I’m thrilled for William and his fiancée. I think it’s interesting that he gave her “the ring,” considering his mother’s unhappy marriage, untimely death and the ring’s general renown. But it’s also kind of sweet that he wanted to give Kate a ring that was sentimental to him and is a piece of his mom.

I think it’s great that a “commoner” is going to be queen of England someday. And I love that William is marrying his college sweetheart, who comes from a traditional, stable background. There’s something so normal about them, which is pretty refreshing. It reminds me of Mary Donaldson, now Princess Mary, future queen of Denmark, who met her prince in a pub during the Sydney Olympics. Plus, William doesn’t seem to buy into the whole regime — he’s going to have a relationship and get married on his terms. You go, sir.

I fear the April 29th wedding date will fall right during spring exams, so there will be no London trip for me this time. I’ll just have to wake up with the rest of the East Coast in the early hours of that morning to watch the festivities.

Oh, who are we kidding? I’ll catch it on my DVR once daylight comes.