I’ve been catching up on episodes of “Who Do You Think You Are?” this week, which always makes me think of my own roots and family history. The truth is I couldn’t be more southern. My mom was raised in the lowcountry of South Carolina, and my maternal roots go several centuries deep in Savannah. My dad is from the Pee Dee area of South Carolina, and we can trace my paternal ancestry back to colonial times in eastern North Carolina and Virginia. I was raised near Charlotte, N.C. — so, like my mom says, we haven’t moved very far.

My exposure to the cuisine of the South while I was growing up included staple recipes that had been in my family and the classics we ate in family-run restaurants. I grew to love food that most southern families have enjoyed for centuries: puckeringly sweet iced tea, fresh figs off the tree, blackberries on the vine and homegrown, road stand vegetables like deep, red tomatoes and fuzzy, tender, juicy peaches. In the fall we picked up pecans under the ancient tree that canopied my grandparents’ backyard and cracked and shelled them inside by the fire. At home we ate fried quail or fish with grits for breakfast, country-style steak with rice, chicken bog, boiled peanuts, slow-cooked collard greens, red velvet and caramel cakes … the list goes on.

In the last few decades southern food has hit the mainstream, probably for its use of fresh, summer vegetables and comfort food feel. As I became aware of what was being defined as “southern food,” though, I started to see dishes with that label that were wholly unfamiliar to me: fried green tomatoes, bread pudding, fried pickles. Even shrimp and grits. Those foods are undoubtedly southern, but just weren’t part of my experience.

There’s another southern dessert that I never encountered — buttermilk pie. Sure, we use buttermilk to coat fried chicken, to make salad dressing, in red velvet cake, in cole slaw. My grandmother still enjoys a glass of cold buttermilk nearly every night before bed (ick). But I have never eaten it in pie form. It does makes sense to use buttermilk in a custard, to provide a tarter note under the sweet creaminess — and I’m a sucker for anything close to a custard. So, in an effort to further explore and preserve my southern traditions, I conducted a baking experiment.

At first, I didn’t have the proper ingredients to make a traditional pie crust (I will never, ever buy that conglomeration of chemicals labeled “pie crust” that comes in a tube from the grocery), but I did have a stash of graham crackers in the freezer. I’m sure a graham cracker crust is sacrilege on some level, but it’s a lot easier than crumbling the butter, rolling out, forming to the pie plate, etc. You just throw the crackers and sugar in a food processor, give it a whir, add some melted butter, give another whir, and then pour it into the plate. Easy peasy.

Like many pie recipes, buttermilk pie is an easy dump-and-stir, one-bowl job. After it baked, it sort of separated into layers — at the bottom, the crust fused with the filling in a dense, sweet bite. In the middle, it was creamy and light, with a strong vanilla flavor that reminded me of cake batter, and it had just the very slightest hint of buttermilk tang. And then the top — oh, the top! — crackled a bit like a chess pie, which I adore. The sugar and butter in the filling crisped in the heat of the oven to form a slightly crunchy shell … heaven.

The pie is a winner, but the graham cracker crust was perhaps too porous. The crumbs swelled and absorbed half the filling, and the crackers and added sugar were a bit too sweet to be paired with this kind of pie.

So, on to a traditional crust. 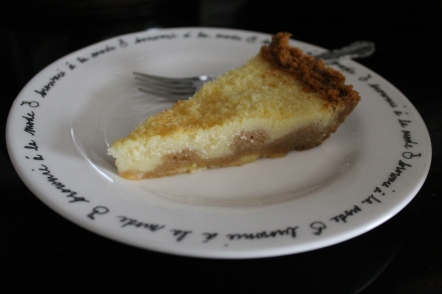